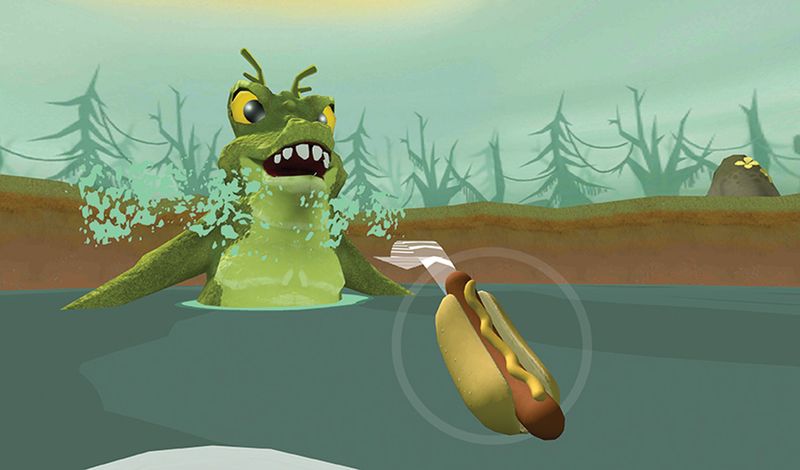 Navigating an ice-walled lake or scouring a swamp for a hidden monster may sound like a fun premise for a virtual-reality video game. But there’s a serious purpose behind the new game Sea Hero Quest VR:  helping neuroscientists design a new test for dementia.

As people play the game, anonymized data – including what actions they take and exactly where they look and for how long – is collected and stored on Deutsche Telekom’s servers in Germany. Players can also choose to provide the carrier with more detailed demographic data, such as information about their age, gender and location.

Neuroscientists and cognitive psychologists will analyze the data to hopefully learn more about how humans develop spatial awareness and navigate new environments. Researchers believe subtle degradation in these skills may be an early warning sign of dementia and that information from the game could eventually lead to new tests to detect cognitive impairment earlier.

Currently there about 47 million people in the world living with dementia, a number that’s projected to rise to 130 million people by 2050 due to aging populations, according to the World Health Organization.

“Through things like brain scans we know that the disease process that underlie dementia actually starts 15 to 20 years before people are aware that they’ve got obvious symptoms,” said David Reynolds, chief science officer of Alzheimer’s Research UK, which was one of Deutsche Telekom’s partners in creating the game. He said that people aren’t aware of these changes because the brain is extremely resilient and able to find workarounds for damage as it gradually builds. Even when symptoms begin to be noticeable, people often lie to themselves about the reason they’ve started to engage in compensating behaviors – such as relying on Google Maps for directions on a familiar route. “What we really want to be able to do is diagnose people 15 to 20 years earlier than we are currently,” he said.

Virtual reality is increasingly being used therapeutically – to help treat post-traumatic stress disorder or alleviate chronic pain. And scientists who study the brain are already using VR-based experiments in labs, Maxwell Scott-Slade, the creative director at Glitchers, said. But the Sea Hero Quest game will let scientists gather data on a much greater scale. Deutsche Telekom said in a statement that just two minutes of virtual reality game play in the new Sea Hero Quest collects the equivalent of five hours of lab-based research.

A non-virtual reality mobile app version of the game that Deutsche Telekom and Glitchers released in November 2016 has already generated data from 3 million people, which is far more than researchers ever anticipated, Christoph Holscher, a cognitive scientist at Swiss university ETH Zurich, said. The largest data set available previously had been gathered from just 600 volunteers. The vast data set has enabled Holscher and other scientists to begin to build a better picture of the distribution of navigation skills in the population. Holscher said that once researchers have created this baseline, it may be possible to develop a test that would use a virtual-reality game such as Sea Hero Quest to actually diagnose dementia.

Among Holscher’s discoveries so far is that the relationship between age and navigation skill is even stronger than scientists had previously thought: in the Sea Hero Quest mobile game data, navigation ability peaks at 19 years old and declines subtly but steadily after that, with much more marked deterioration happening when people are in their forties. But Holscher allows that it is possible that this finding is not the result of an actual age-related decline in navigational ability, but due to  teenagers being much more adept at operating the controls of mobile phone-based video games than older adults who did not grow up using the technology. That’s why Holscher said he’s hoping the new virtual reality game – where a person can look around just by turning their head as they would in the real world  – will help validate this research.

Data from the previous Sea Hero Quest game also confirmed laboratory studies that men and women differ in their navigational strategies, with men more likely to rely on landmarks and external cues in the environment, and women more likely to use an internal, cognitive map and an intuitive sense of direction to help them get around, Holscher said. In addition, for reasons still not understood, researchers found that on average people from Scandinavia mastered the game’s navigation tasks better than those from other regions.

The VR game also incorporates several specific experiments to assess different underlying abilities involved in navigation. This includes a Morris Water Maze, where the person is placed in a circular body of water with no external visual cues and must find a particular spot in the water. The task was developed by British neuroscientist Richard Morris in 1981 and has been used to test the cognitive mapping abilities of both humans and animals and the role that a structure in the brain called the hippocampus plays in this mapping.

Read the original article at Bloomberg.com