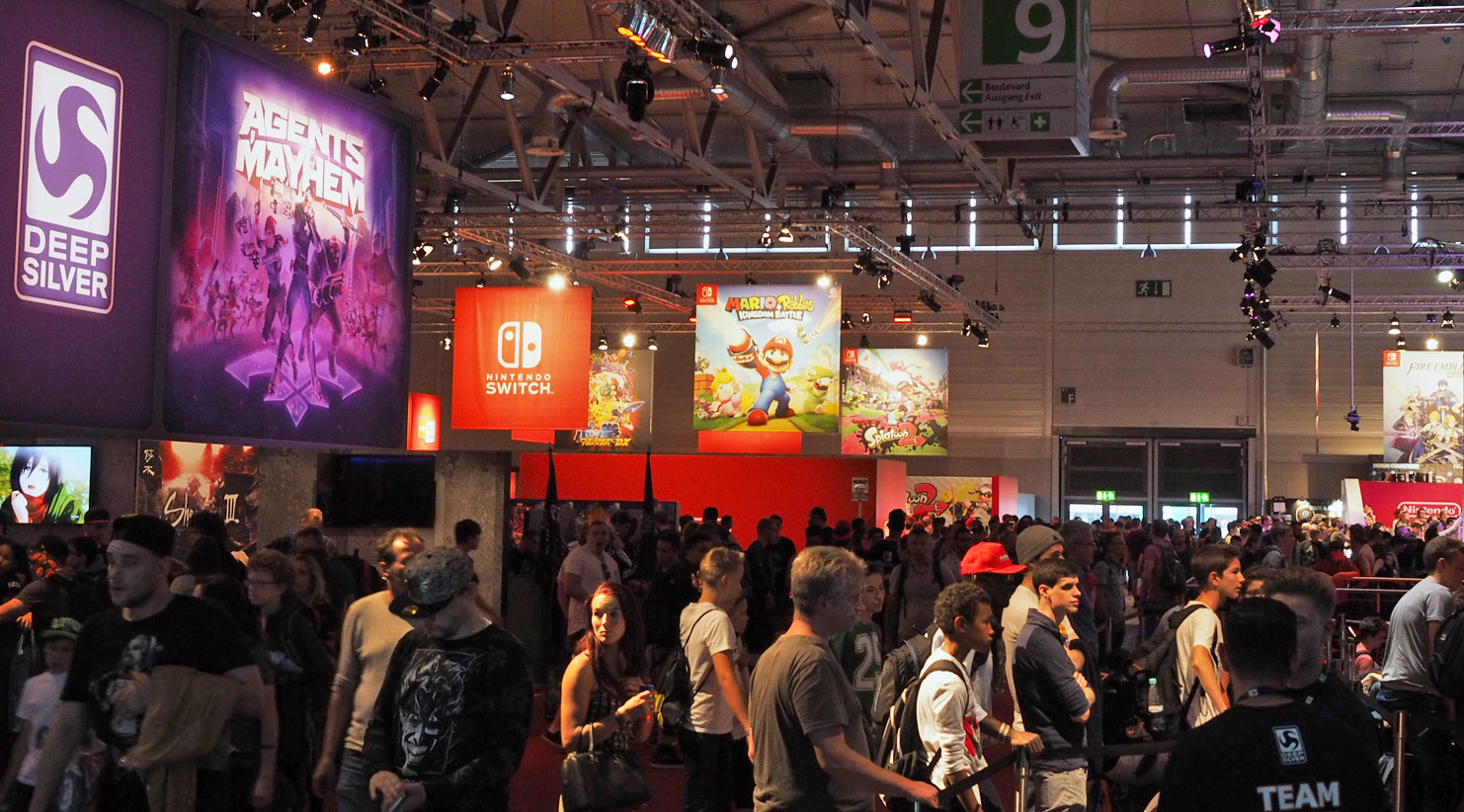 Here’s what stood out at this year’s Gamescom, the world’s largest event for computer and video games.

We’ve just wrapped up another games show and found plenty to keep us busy in Cologne, Germany. Gamescom might not have the flagship reveals of E3, but all the major games makers are here –, and they usually have plenty to show off. Whether it was VR tasters, indie hits of the future or adding drama to the beautiful game, there’s likely something for everyone. Here’s a list of the best and the worst as told by the Engadget team.

Where the Water Tastes Like Wine has been on my radar for a while now. Back in 2015, Engadget’s own Jess Conditt wrote an excellent feature about its interesting and melancholic music. Finally, at Gamescom 2017, I was able to play a slice of the game for myself. It’s a hard title to describe, but here goes: part visual novel, part open-world RPG. Your goal is to travel across America and collect “stories” from its inhabitants. These extraordinary tales can then be told to other people, who might share more of their own life story in return. The idea is to collect so many that you can weave your epic yarn about the American dream.

Notably, all of the individual stories have been written by different people, including Cara Ellison (Dishonored 2), Austin Walker (Waypoint), Leigh Alexander (The Guardian) and Anne Toole (The Witcher). It comes together as a kind of anthology piece, exploring different nooks and crannies of American culture. The overworld is like a JRPG; the camera positioned up high as you push a skeletal figure toward stamp-size towns and houses. It’s painted in beautiful, pastel colors, with sharp line work that gives it an almost cel-shaded feel. Couple that with some stunning, picture book-esque story sequences, and you have a game oozing with style.

There’s a supernatural element to the story (you’re a walking skeleton, after all) that blends well with the folklore theme. The stories you find and share with other people take on a life of their own, developer Johnnemann Nordhagen tells me, morphing and evolving like a game of “Pass It On.” As you walk across America, you’ll encounter the world with a “psychedelic, surreal and creepy tinge” too, no doubt commentating on humanity, society and the different shades of morality through the ages. There’s no release date, but I’m keen to see how Where the Water Tastes Like Wineturns out.

I love Little Witch Academia. The Japanese anime produced by Trigger is a lighthearted, comical series about Atsuko “Akko” Kagari and her studies at the Luna Nova Magical Academy. The franchise has had a rocky journey; it started as a 26-minute short in 2013, before a second, slightly longer feature was funded through Kickstarter. The property’s rising popularity then gave birth to a 12-episode season that just finished airing in Japan and on Netflix worldwide. Now it’s getting a video game called Little Witch Academia: Chamber of Time.

For the most part, the visual style gels with the series, and Trigger has apparently contributed some original cutscenes. Your task is to solve a time paradox mystery which is causing everyone inside the castle to live the same moments over and over again. Every time you complete a story section, you’ll be warped into a side-scrolling dungeon-crawler with a bewildering number of magic bars and spell prompts on screen. It all looks messy and convoluted, and the hard, beat-em-up action is a far cry from the show’s gorgeous animation. In short, it all looks rather cheap.

Of course, I hope I’m wrong. The game is supposed to come out in “early 2018,” but the fact it wasn’t playable at Gamescom — Bandai Namco showed only a brief, hands-off demo — is telling. Little Witch Academiadeserves the same sort of treatment as Naruto, with its excellent Ultimate Ninja Storm series, and Dragon Ball, which is being celebrated with the gorgeous FighterZ. I want a game that captures the historical charm and humor of the series, as well as the fascinating world Trigger, has begun to explore. Anything but another rushed, probably underfunded, tie-in game.

Of the many titles, I played at Gamescom last week, Dishonored: Death of the Outsider stands as my favorite. That’s not entirely surprising, though. I’ve been a fan of the series since the first entry, which I appreciated much more than the overhyped Bioshock Infinite. The new game is a short standalone entry, not a full-fledged sequel or DLC for Dishonored 2, but that doesn’t mean Arkane Studios held back. There are plenty of new powers and mechanics that make Death of the Outsider feel completely refreshing, while at the same time filling the Dishonored-shaped hole in my heart.

Beyond that, I had a blast playing Duck Season on the HTC Vive, which we first saw back at E3. It does an excellent job of evoking NES nostalgia, while also bringing in entirely new VR-gameplay mechanics. You’re still shooting down fowl like in the original Duck Hunt, but you also have to hold the Vibe’s controllers like a hunting rifle, which takes a bit of practice. There’s no targeting reticule, so you have to look down your gun’s sights to aim properly. While it took some getting used to, it wasn’t long before I was taking down ducks (and shooting that annoying dog) with skill.

And while I technically saw it before Gamescom, I’m happy to report that Cuphead lived up to all my of expectations. Like many, I’ve been eager to experience its hand-drawn 2D world since I caught my first glimpse of it in 2014. It’s rare to see games relying on traditional animation these days, and we’ve certainly never seen a game like Cuphead, which evokes classic 1930s-era cartoon. Somehow, it’s even more beautiful than I imagined in person. But since it’s meant to evoke thumb-numbing side-scrollers like Contra, expect to die a lot.

As for the worst of Gamescom, I’d have to point to most of what I saw from Microsoft. The Xbox One X was a big deal at E3, and I’m sure it’ll appeal to many hardcore gamers. But it was disappointing to see that Microsoft still hasn’t given us many reasons to get excited about it. Sure, it’s powerful, and it’ll push your games beyond 1080p. But where are the amazing, must-have games? Why is it $500, when the PS4 Pro offered many of the same upgrades for $400 last year? And what the heck is up with its VR support?! As I said at E3, I’m sure the Xbox One X will mature into a great console next year. But I’m surprised Microsoft isn’t doing a better job of selling it right now.

I had a great Gamescom. Not only did I get to needle the director of Final Fantasy XV about all his free camping gear, but I also got to try out some indie games that I’ll be adding to my collection. Ruiner and Swords of Ditto couldn’t be more different visually, but Devolver brought both to the Gamescom crowds. Ruiner is a brutal game, both in its difficulty and its gory delivery. It’s also punchy, addictive and just so very grimy. Conversely, Swords of Ditto was adorable, bright but just as intriguing. Paying credit to Zelda games of the past, SoD will combine a bunch of ridiculous weapons with cooperative play. I was also intrigued by The Talos Principle VR, a virtual take on the original. The physical puzzler is having its second attempt at VR and is still smart relaxing, and not nearly as tiring as many early VR demos can. (I’ll come back to that…)

I also might have been bitten by the survival-horror bug again. The Evil Within two is trying to combine the brutal set pieces and psychological horror of the original with a more substantial open world. More crafting, more exploration and more optional quests made the demo deliver an experience that wasn’t as dark as the first game. Does The Last of Uscount in the same genre? Because that may have been the last game I’ve played that made me jump. The Evil Within 2 might make for some future sleepless nights.

Gamescom VR fatigue came in two types. First is the (already!) well-worn sinister psychological experiment VR trope. If it wasn’t PSVR’s Inpatient, then it was Ubisoft’s Transference. Inpatient came from the team that made Until Dawn, while Transference was wrapped in so much mystery (apparently under 100 people have played the demo so far) that I was pretty excited to play it.

Unfortunately, these games play to the same jump-scares to make the player respond. Transference also hadn’t quite finessed the view, and it made me a little motion sick — don’t show VR demos if they’re going to make early players feel queasy. At this still early stage of VR, these are the things that will put us all off.

Other disappointments? Efforts to shoehorn major gaming franchises into underwhelming VR experiences. Bethesda is taking three of its major games to VR, and Skyrim VR on the PS4 was just not all that good. A stripped-down demo (and aging visuals), did nothing to persuade me that I was now missing out because I hadn’t bought into PlayStation VR yet. And while I’ll pretty much play anything with Final Fantasy slapped on it, I draw the line at VR fishing.

Read the original article at Engadget.com