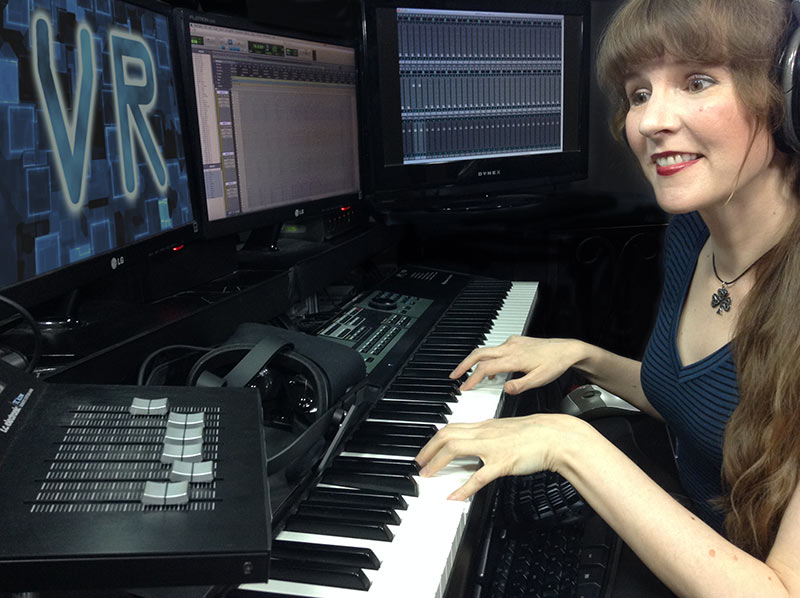 We wanted to share with you a guide to understanding music in VR written by Winnifred Phillips, award-winning composer with more than 13 years of experience in the game industry and a long list of video game credits that include titles from five of the most prominent franchises in gaming: Assassin’s Creed, LittleBigPlanet, Total War, God of War, and The Sims.

When I’m not at work in my studio making music for games, I like to keep up with new developments in the field of interactive entertainment, and I’ll often share what I learn here in these articles. Virtual reality is an excellent subject for study for a video game composer, and several of my recent projects have been in the world of VR. Since I’m sure that most of us are curious about what’s coming next in virtual reality, I’ve decided to devote this article to a collection of educational resources. I’ve made a point of keeping our focus general here, with the intent of understanding the role of audio in VR and the best resources available to audio folks. As a component of the VR soundscape, our music must fit into the entire matrix of aural elements, so we’ll spend this article learning about what goes into making an expert sound for a virtual reality experience. Let’s start with a few items that discuss methods and techniques for VR audio practitioners.

3D Sound Labs takes us through the three most popular sound formats for spatial audio in VR: Multi-channel, Object-based, and Ambisonic.

VR audio can consume enormous computational resources, resulting in a resource war between audio and video content. This article discusses how audio demands in VR consume memory bus bandwidth, and proposes a short-cut that manipulates the frequency response of the audio content to enhance spatialization while wasting fewer resources.

Adapting Your DAW for VR Audio

A VR sound editor discusses his methods and workflow for virtual reality in this article. Topics include capturing audio in the ambisonic format and customizing the Pro Tools environment for spatialized audio projects.

This article summarizes the available entry-level techniques and equipment that can help a newcomer jump into the world of spatial sound for virtual reality.

In this article, we learn about some of the top equipment and methods used by the VR-focused division of an experienced audio post-production facility.

Now that we’ve garnered some insight about what goes into creating VR audio let’s take a look at some high technology and tools designed specifically for creating virtual reality sound.

This article explores the 3D rendering technology of the G’Audio Works plugin, which supports multi-channel, object-based and ambisonic spatialization within the Pro Tools application.

This article focuses on the spatialized audio solution for VR developed by the popular Steam software distribution platform. Available as a free download without any royalty requirements, Steam Audio is designed to assist both Unity and Unreal developers in creating and implementing spatialized audio in their projects.

The Two Big Ears audio company is known for its 3Dception software enabling audio folks to author spatialized audio for VR applications. Now that Facebook has purchased the company, the software has been rebranded as the Facebook 360 Spatial Workstation with added compatibility for 360 videos hosted on the Facebook platform. The software is free for everyone to use in their projects. However, the previous plugin compatibility with Unity, Wwise, and FMOD is no longer offered for new users.

This article describes the Omnitone application, developed by Google to combine ambisonic decoding with binaural rendering. Omnitone was designed to deliver spatialized audio for browser-based experiences and apps designed for Android and iOS.

For Windows games and applications, NVIDIA now offers the VRWorks Audio Software Development Kit for implementing spatialized audio in VR for 64 bit Windows apps. For developers working in Unreal Engine 4, the VRWorks Audio game engine plugin can be added directly to the UE4 engine, while future plugins are promised for other game and audio platforms.

This article runs through the capabilities of the Google VR Audio SDK, which was designed for use in developing applications for Google Daydream and Cardboard. The report includes helpful suggestions for using the audio system to simulate indoor and outdoor environments, advice for creating spatialized sounds that users can quickly pinpoint, and tips for ensuring that aural and visual content reinforce each other within the VR space.

Working in virtual reality can be a complicated and intimidating process. Thankfully, there are plenty of online communities and organizations to help us. I’ve assembled some of these below:

Finally, here’s a list of the virtual reality conferences, summits, and conventions that have featured audio discussions and demonstrations in their past program schedules:

I hope you find the above resources interesting and helpful! If you have any suggestions for additions to this list, please let me know in the comments section below!