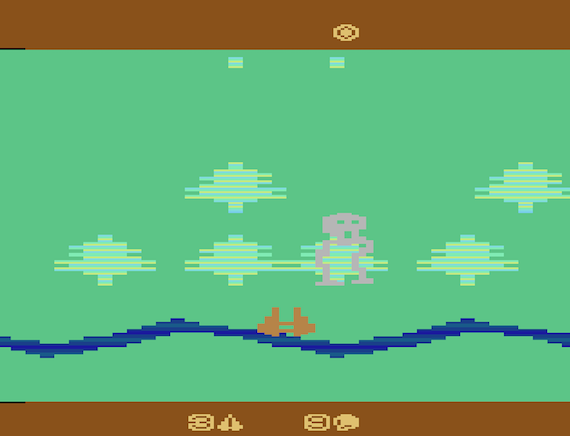 The ways that books and video games can tell us stories aren’t as different as we used to think. Both require intense concentration and thoughtful interaction, albeit in a variety of ways. Both also insist upon our willingness to escape from the workaday world to step into one built word by word or bit by bit by somebody else.

For those gamers willing to put down the controller for a few hours and pick up a book, we’ve compiled a list of five novels that gamers are likely to enjoy.

Jason Rekulak’s enjoyable debut novel The Impossible Fortress includes a video game. I know that sounds implausible, but each chapter begins with a line of BASIC code. It looks like this:

And so on. If you have an old Commodore 64 in the attic, you could type it all in and play a simple game. A more contemporary version of the same game can be found on Rekulak’s website.

His story, set in 1987, features 14-year-old Will Marvin, whose commitment to coding a C=64 game of his own is causing him to flunk the ninth grade. He collaborates with his friend Mary to enter a game design contest, but his other friends’ increasingly desperate attempts to score a copy of Playboy becomes distracting. Those of us who grew up in the 1980s will appreciate the nostalgic recollections of cassette tapes and floppy diskettes.

A video game also sits at the heart of another recent debut novel, Nathan Hill’sThe Nix. In, it, World of Elfscape—an obvious stunt double for the massively popular World of Warcraft—features prominently. Having spent more time than is probably reasonable playing WoW, one passage in particular about the game’s weekly maintenance downtime hit close to home for me. A character by the name of Pwnage is waiting for the game servers to restart:

And not knowing exactly when the servers would come back online made Pwnage feel stressed out, which was a bit of a paradox because the ostensible reason he played Elfscape was because it so effectively relieved his stress. It was where he turned when he felt too encumbered by the wearying details of his life.

Nix’s writing rings true to my own gaming experiences and to a discussion I had with a clinical psychologist about the nature of video-game addiction while I was researching a nonfiction book. So too does Lucky Wander Boy by D.B. Weiss, which also features a fictional gamer’s determined efforts to keep playing no matter what. Before working on the Games of Thrones television series, Weiss wrote a book that reads like both a love letter to early arcade-cabinet video games and a purposely pompous dissertation on their supposed meanings.

Our bro hero, Adam Pennyman, is planning the ultimate guide to video games, the Catalogue of Obsolete Entertainments. “It ‘s hard to ignore the similarities between Donkey Kong (the creature) and the demiurge of the Gnostic heresies,” Pennyman writes. “After imprisoning the real creator and occupying her harmonious creation, Donkey Kong defiles it, knocks it out of whack, making it as imperfect as the material world we are compelled to live in.”

Pennyman wants to find and play a fictional and scarce arcade game from his childhood, Lucky Wander Boy. His quest sends him on every variety of misadventures and provides Weiss the opportunity to wax philosophic. It’s a riot, but Pennyman does make a compelling case for the importance of video games: “The Classic games were Classic because, like classical music or architecture, they strove to give life and weight to ideals of order and proportion, to provide a vision of timelessness.”

One of the storylines in the magisterial Plowing the Dark by my former MFA professor Richard Powers involves a startup company’s efforts to create an immersive virtual reality environment known as the Cavern. The developers, it turns out, takes inspiration not only from Plato’s famous allegory of the cave in the Republic but also the classic text-based game Colossal Cave Adventure. One of the characters experiences a twinge of nostalgia that will sound very familiar to many of us who still play those old text-based games:

He stared at the sentences and saw his father, one Saturday morning in 1977 when young Jackie had been acting out, taking him to the office and parking him in front of a gleaming Televideo 910, hooked up to a remote mainframe through the magic of a Tymeshare 300-baud modem.

Many longtime gamers know that Colossal Cave Adventure directly inspired what is arguably the most influential video game of all time, Adventure for the Atari 2600. That was the first graphic adventure game, and it included the first known Easter egg in video game history. At the time, video game designers didn’t receive much in the way of public credit for their work.

In Ernest Cline’s Ready Player One, the fictional game designer James Halliday described what happened next: “‘So the guy who created Adventure, a man named Warren Robinett, decided to hide his name inside the game itself. He hid a key in one of the game’s labyrinths. If you found this key, a small pixel-sized gray dot, you could use it to enter a secret room where Robinett had hidden his name.”

This is a real story. I spoke to Robinett while writing my book. “I called it my signature,” he told me. “Like down in the corner of the painting.”

Robinett’s sneaky Easter egg was central to Cline’s epic of geek literature. In Ready Player One, Halliday created a massively multiplayer online game called OASIS that grew so large it became a kind of virtual reality. Inspired by Adventure, upon his death, he made it known that he hid an Easter egg in OASIS. Cline’s story details the exploits of the teenage Wade Watts, who dreams of discovering Halliday’s secret and inheriting his vast fortune. True to form, Cline, buried an Easter egg of his own deep in Ready Player One and in 2012 he gave a DeLorean to the first person who found it.

(Perhaps this would be a good time to admit that my novel included an Easter egg—a hidden reference to a particular, well-known video game—that to the best of my knowledge no one has yet discovered. Good luck finding it. Sorry, though: I will not be buying anyone a sports car.)

Video games have played important roles in many other novels, of course, like God Jr. by Dennis Cooper, United States of Japan by Peter Tieryas, and JPod by Douglas Coupland. One detail that jumps out about this reading list, though, is that these are all written by men. That might be consistent with the unfortunate public stereotype about gamers, but in reality, according to the Pew Research Center, “equal numbers of men and women play video games” and “there are no differences by race or ethnicity in who plays video games.”

I’ve discovered many short stories about video games by women, including Kit Reed, Kelly Link, and Amber Sparks, but strangely few novels. I know that my friend Natalie Mesnard is writing a book about video games, and I have every reason to suspect it will be awesome. Holly Jennings’s Arena looks promising, and there are some licensed tie-in books, but please use the comments section to tell me what else I’m missing out on. Perhaps the apparent paucity of novels about video games by writers of color and women has something to do with the fact that their many contributions to video game history have been overlooked for too long. In the years to come, I’m eager to see that change, and for this list to grow and diversify.

Read the original article at Themillions.com