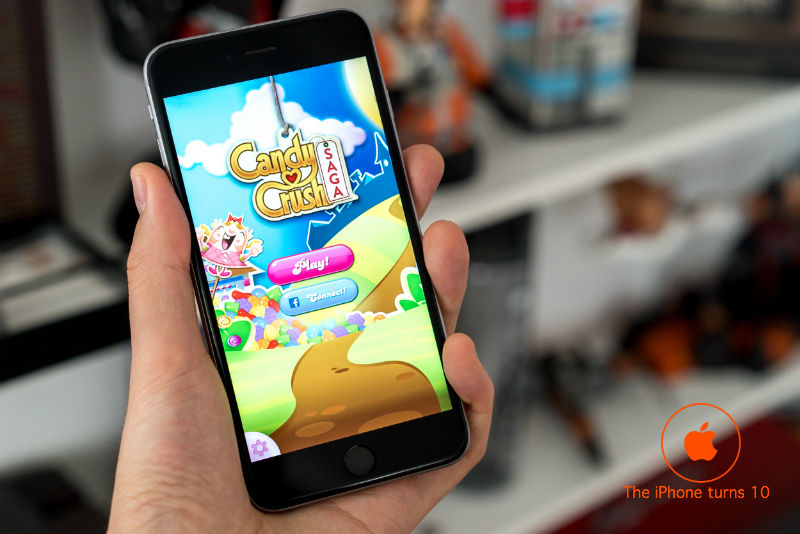 Apple’s now-signature product has made a lasting mark not only on our communications but many unexpected walks of life. For gaming, the iPhone sparked a gold rush and burst of creativity still felt today.

In the heart of Stockholm, Sweden, mobile games developer King has built its forest. Alongside Earth-toned carpeting and plywood, trees are walls coated in Norwegian lichen. Instead of the harsh glow of a fluorescent strip, there are ambient lights that change hue with the seasons. Instead of chairs, there are ceiling-hung wicker baskets and long maple desks with multi-colored stools. Along the floor is an artificial stream that scans the footsteps of employees, allowing them to interact with virtual fish and insects. In the winter, the stream freezes over, lending an audible crunch to each footstep.

Such extravagance is hardly extraordinary for the startups and venture capitalists that have spread across California’s so-called Silicon Valley (Airbnb has its makeshift forest, complete with a taxidermied raccoon). But for the companies that build their fortunes on the fickle market of mobile games, success is far from guaranteed. King is one of the lucky ones. It has, in its finer moments, raked in profits of half a billion dollars in a single year. So compelling were its profits that publishing giant Activision Blizzard swallowed it up for $5.9 billion in 2015.

Few could have predicted the meteoric rise of King, which began life in 2003 creating middling browser-based video games. Like others that had struggled to develop a foothold in the industry—Rovio, Chillingo, and Supercell, to name but a few—King’s fortunes changed when Apple, having released the first iPhone in 2007, finally caved to pressure from developers and released a native software development kit one year later.

Steve Jobs’ dreams of a Web-based app future notwithstanding, the SDK transformed the iPhone into a fully fledged platform, complete with its storefront dubbed the App Store.

In the beginning, there was ‘Touch Fighter’

While commonplace now, the launch of a unified digital storefront alongside a native SDK was revolutionary. Finding apps for Symbian, Nokia’s dominant smartphone operating system at the time, meant navigating a mess of nondescript Web portals and downloading suspect zip files. Games, if you could find them, were typically programmed in Java and were either simple 2D affairs (Snake, ftw!), or ran at slow frame rates due to a lack of optimization for the hardware.

The first native game for the iPhone came from Apple. Touch Fighter unveiled alongside the SDK, might have been a mere tech demo, but the OpenGL graphics and touch and motion controls it pioneered became a blueprint for third-party developers. “I don’t have a joystick on here or a four-button toggle control. How do I steer?” asked Apple’s Scott Forstall during the demo. “We’ve got a three-axis accelerometer built in, so all I have to do is move the phone around!”

Third-party developers soon followed. Sega unveiled a version of Super Monkeyball, which used the iPhone’s accelerometer to guide the titular monkey-in-a-ball around platforms like a modern-day Labyrinth. Electronic Arts created a touch-controlled version of Spore, an odd creature creator from Sim City developer Will Wright. The best of the bunch was Pangea Software’s Enigmo, a clever physics-based puzzle game that flaunted the power of the iPhone’s 32-bit ARM CPU.

The speed with which developers could create compelling games for the iPhone contrast with increasingly complex console games, which could take upwards of three years to produce and cost hundreds of millions of dollars. But it wasn’t the speed of development or the apparent quality of the games that had a lasting impact—it was Apple’s business model. Instead of working with third-party publishers, Apple would instead publish every game and every application on the App Store itself.

Revenues were split, with 70 percent going to the developer and 30 percent going to Apple. There were no credit card fees or hosting fees, or marketing fees, and developers would be paid monthly. Most importantly, there was no set price. Developers were free to price their apps as they saw fit, with only a lower threshold of 59p/99c to adhere to. They could even opt to give away their apps for free, although few did.

Both Super Monkeyball and Enigmo launched at £5.99—significantly less than the £50 of a full-priced console release and even less than the smaller indie titles of Xbox Live Arcade and Steam. This was more than enough to support the small development teams behind the games. The App Store launched with just 500 apps, which ballooned to more than 3,000 after just three months. Downloads hit a remarkable 100 million, far exceeding even the most bullish of analyst expectations. By the end of 2008, there were well over 5,000 apps. In April 2009, Apple had already reached one billion downloads.

What began as a concession to developers had grown into a full-scale gold rush. Stories of bedroom coders making hundreds of thousands of dollars with a clever app or game flooded the tech press. Mainstream newspapers like The Guardian wrote guides on “How to become an iPhone developer in eight easy steps.” Companies like Smule could be founded and profitable (to the tune of $1 million) in just a year. But as the apps flooded in—many from first-time developers—it became increasingly difficult for developers to attract customers. Soon, a place on the Top 10 lists of the App Store became essential.

Getting there meant either gaming the system with spurious downloads or by dropping prices. The latter quickly became the norm. The biggest hit of 2010—Rovio’s Angry Birds—was a charming physics-based puzzle game priced at a mere 59p. The initial €100,000 cost of Angry Birds—Rovio’s 52nd game and its first big success—was quickly offset by revenue that stretched into the millions. Its reach extended from pop sensation Justin Bieber through to former UK Prime Minister David Cameron.

The success of the App Store didn’t go unnoticed. “Apple is the most valuable company in the gaming business right now,” declared famed industry analyst Michael Pachter. “There is no reason that you are going to need a dedicated gaming machine in the next year or two,” saidVariety before the launch of the Xbox One and PlayStation 4. “Apple sold more iPhones in the last quarter, 35 million, than Nintendo has been able to sell handhelds in any single year,” said The Verge in a piece that correlated declining handheld sales with rising iPhone sales.

The iPhone and the App Store didn’t kill the console, of course, not even the handheld. Those that failed—like Sony did with PlayStation Vita, or Nintendo did with the Wii U—did so because they misunderstood what gamers wanted. Instead, the iPhone grew the market. Angry Birds and Peggle introduced whole generations of people, young and old, to games. Indies could experiment with quirky ideas, often to great success. Even as it grew into a billion dollar industry, games never achieved the sort of mainstream acceptance associated with films and television. But the iPhone turned everyone into a gamer.

Apple’s uncanny ability to convince customers to upgrade their devices every year, though waning, may have influenced Sony and Microsoft, too. ThePlayStation 4 Pro and Xbox One X are both mid-cycle upgrades that promise to continue to play older games, but each gives those eager to stay on the cutting edge access to more powerful hardware and sharper graphics.

However, the iPhone’s most lasting legacy is perhaps it’s most controversial. In a rush to reduce prices on the App Store, many developers began looking at ways to make money without charging an initial fee. Some opted to include advertisements, which took the form of banners and videos that appeared while the game loaded (Apple even started its now-defunct ad network, iAd, to get a cut of the profits). Others began designing their games around the idea of in-app purchases, now dubbed the “freemium” model.

Instead of basing a player’s progress on skill alone, developers could incorporate features that made it more challenging, if not impossible, to move forward without spending money. Most commonly, management sims like Zynga’s Farmville would include intolerably long build times for objects, which could be reduced by spending a virtual currency, which was bought with real money. Other games, like Two Dots, restrict some lives you have, only offering more after a long wait or a small fee.

So lucky are freemium games that they routinely top the top-grossing chart on the App Store. What was once a quirky experiment is now a cutthroat business that employs many of the same psychological tricks used to keep gamblers at a slot machine. Exploiting the so-called “whale”—a player that disproportionately contributes to a developer’s bottom line—is standard practice, even when it draws the ire of both Apple and parents.

The freemium model, for better or worse, has found its feet in recent years. Although the PC and console market started its downloadable content experiments before the iPhone was released (horse armor anyone?), the mass popularity of mobile games helped refine the concept.

Today, micro transactions can be found in the paid-for abilities of Mirror’s Edge Catalyst, the keys of Team Fortress 2, and the weapon skins of Gears of War 4, while publishers like Square Enix, Bethesda, and Blizzard have embraced freemium on mobile with Final Fantasy Brave Exvius, Fallout Shelter, and Hearthstone.

King, however, has been freemium’s biggest beneficiary. In 2011, it released a browser-based version of Candy Crush Saga, a match-three puzzle game that tasked players with completing challenges with a limited set of moves. In 2012, King launched Candy Crush Saga on iOS and Android, reaching 10 million downloads in a single month. At its peak in 2015, King reported 550 million monthly active users, which fell to 409 million in 2016—still an impressive number.

King’s billions and its subsequent takeover by Activision have allowed the company to expand beyond its home country of Sweden. Today, it is headquartered in the heart of London’s Soho. Inside 66,400 square feet of prime London real estate employees sit under a vast glass ceiling, retiring to a full-scale cinema and music room when lethargy strikes. King’s next mobile game will be based on Activision’s hit shooter Call of Duty. It has been encouraged to “think outside the box.”

Read the original article at Artstechnica.com