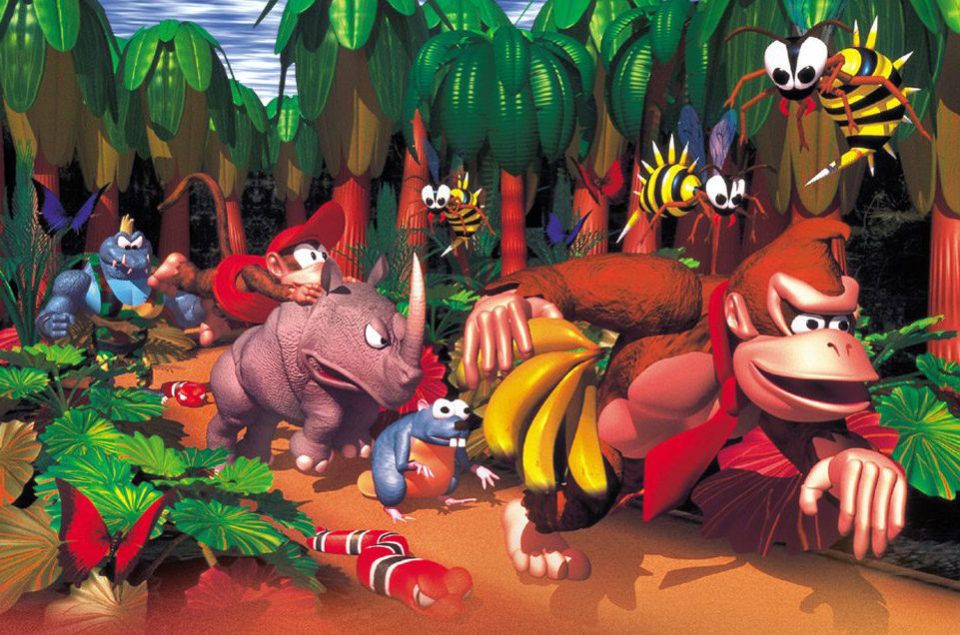 “We were pioneers at the time,” says David Wise, casting his mind back to the exuberant Nintendo video game era of the late ’80s and early ’90s.

“We always tried to stretch the boundaries, whether it was graphics or gameplay. [Those games] made a lasting impression.”

Over a career that has spanned four decades to date, Wise has established himself as one of the world’s most renowned creators of video game music. Working with the legendary British video game company Rare, Wise composed soundtracks for more than 50 games on Nintendo’s NES, SNES and Game Boy consoles – including classics such as Battletoads and Donkey Kong Country.

A whole generation grew up with Wise’s music blaring out from their bedrooms and living rooms. “I still get messages from people saying I was the soundtrack to their childhoods,” he says. “It’s strange. At the time I was completely unaware, that was happening. I worked in an office in a farmhouse in the middle of nowhere. I was removed from it all. “It was only later I realized people had embraced the soundtracks.”

A challenging way to make music

“At the time I’d been working in a music shop where I had access to all the latest gear. But to create music on the NES, I had to type in everything by hand. There were just four channels. “Very basic noises. No synths. Virtually no memory. You had to use crude tools to get sounds in. It was a very challenging way to make music.”

Wise has likened the NESs musical output to something resembling a “door-bell.” But it indeed carried an enduring charm. These days, composers often spend years working on a game. Back then, Wise sometimes had to knock out an entire video game score in a week. Maybe a month if he was lucky.

For Wise, who was discovered by Rare co-founders Tim and Chris Stamper, the opportunity saved him from life at Walker’s Crisps in Leicester, and the somewhat less thrilling prospect of picking chips off the production line. “Rare and Nintendo both had pride in what they were doing.”

He soon took to life at the rapidly rising UK developer. “It was intense, enjoyable, and very competitive,” he recalls. “We were like kids in a toy shop any time a new technology came out. We worked very hard, but we were just having fun.” Their publishing partners at Nintendo, he notes, “worked in a very similar fashion – with pride in what they were doing.”

By the mid-90s things stepped up a gear. Wise was handed the keys to one of Nintendo’s flagship franchises, in the shape of the iconic Donkey Kong. “It was completely unexpected,” he notes.

“I was under the impression I was just putting in some original music for Donkey Kong Country, and that someone else would come in and do the full soundtrack. Nintendo had a massive, prolific music team in Japan. In three years between 1994 and 1997, Wise wrote the music for the first three Donkey Kong Country games, as well as Donkey Kong Land and Diddy Kong Racing “I wrote three demos on the SNES, played them to Tim, and he asked me to put it together. Off it went.

“They liked it, and they asked me to carry on working on it.”

Released on the SNES at a time when blurry sprites and clunky animations were still prevalent, Donkey Kong Country proved to be a groundbreaking game. “We’d been working in 2D graphics,” says Wise.

“Then suddenly you have pre-rendered graphics that look almost 3D. They were popping out of the screen. “It was a huge difference at the time. We knew we had something special – and we wanted every aspect of it to be special.” Wise recalls a determined drive to muster music as exuberant and exciting as the game’s groundbreaking visuals.

“You can’t help but be inspired by that. I didn’t want to let the graphics down!”

The end of the road

After almost 25 years with the company, during which he also lent his talents to Diddy Kong Racing on the N64 and Star Fox Adventures on the GameCube, Wise eventually left Rare in 2009. The Stamper Brothers had already moved on two years earlier – and the company had changed drastically since the one Wise began his career with. Especially after being acquired by Microsoft in 2002.

“We knew we had something special” (Photo: Rare/Nintendo) “It was the right time to leave,” he says. “I’d gone as far as I could there, and there were other opportunities. “It changed from being ten people at the start to 30 or 40, and then, when Microsoft got involved, it got up to about 250 staff. “There was a lot of management. The games became more about the vision of Microsoft. “But I think things have moved on. Lately Rare is creating colorful games more in keeping with what Rare became known for.” Wise now works as a freelance composer, having founded David Wise Sound Studios.

Recently, he had the opportunity to reunite with former Rare colleagues from the company’s heyday. 3D platformer Yooka-Laylee – a love letter to ’90s era ‘collectathons’ led by former Rare employees – was released on a host of different platforms earlier this year. Wise was welcomed on board for the project. “I was delighted to be asked. It was nice to collaborate with people I used to work with. Like a trip down memory lane, but not. The same, but different.

Wise also composed music for 2017’s vibrant puzzler Snake Pass “The technology had moved on, and they had the freedom to make the game they wanted. It was exciting to work on a 3D, exploring platformer – and great to see that kind of game still receiving interest.” Over 30 years in the business, Wise has seen the process of creating video games – and their music – evolve considerably.

“The biggest difference is that there’s far more complexity. It hasn’t got any easier. But it does sound a lot better!” he laughs.

“I’ve got some interesting new projects I’m working on. With games, there’s always something exciting to look forward to.”

Read the original article at inews.co.uk